To organize an event at this scale requires weeks of hard work, sweat, tears and dedication. But the comments we received thus far from some of you proved to us that is all worthwhile

In particular We would like to thank the following persons
Raymond houtman#nomac
Marcus Wincler RC, Javier Garcia #efra
Mari van den Broek #DutchRCTimekeeping
#DJJean
Bjarne Høllund the NR 1 Announcer who with his voice really made a difference , and he created such positive vibe on the track!!
With this all said , we would like to give thanks to in our opinion to the most important persons responsible for this unique event , our Raco2000 volunteers they have been working as a team the last few months building the new resurfaced track and setting it up for the EC40+ event

We hope that you enjoyed your time at our track!

Again big thanks to you all ,and hope to see you soon ! 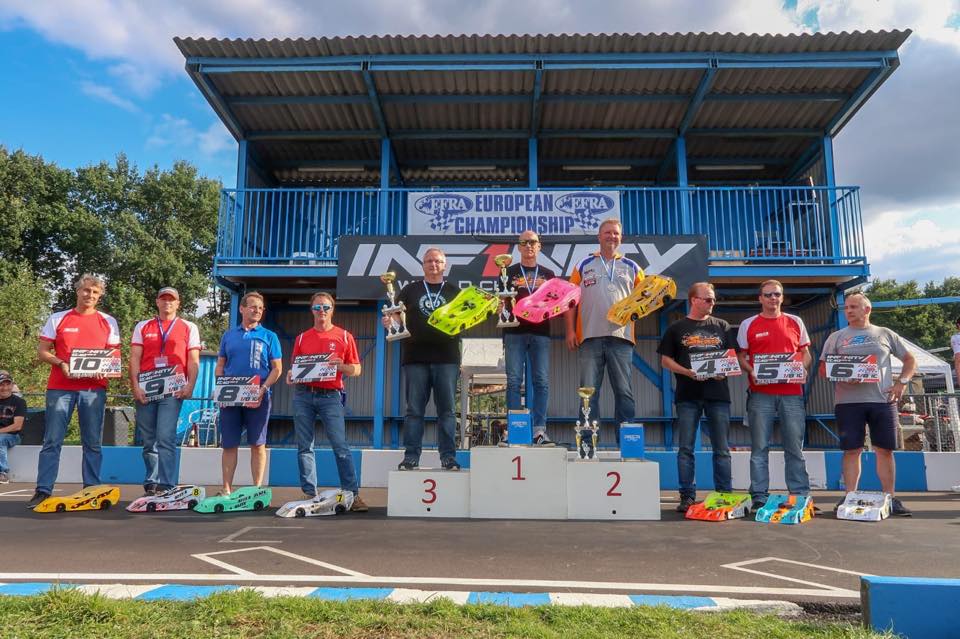 EC +40 came to an end. It has been great race days, perfect atmosphere, brilliant organization and close battles on the track.

Saturday finals started with perfect weather, without any chance of rain according to the weather forecast.

Before semi-finals 2nd leg for 1/8th EP in stock and modified. In stock Roy Bakker got 1st place and Thilo TÖDTMANN got first spot in Modified, which means that the German driver won the title in Modified in this 2nd round.

Time to race the Semi-Finals in 1/10th. In Semi B 1/10th Andrea Burren, Bernd Hasselbring and Marcus May secured their cars for the final. In Semi A 1/10th French driver Jean-Baptiste Geneau crossed the checkered flag in first position, with 3 laps ahead of second place Jurmin Etnel and Dave De Ruiter. The best times in the semi’s went for Olivier Gurdebeke and Raymond Tempelaars from Semi B.

Just after the 1/10th semis, we raced1/8th IC. In the semi B, Andreas Giesa, Jacky Mouton and Jürg Nydegger got the 3 places for the final, and in Semi A Swiss driver Luca Martinelli together with Remy Hasler and Addie Van de Ven went ahead to the main. Best times to get the chance to race main final in 1/8th went to Martin Zevenhoven and Daniel Bapst.

After the main finals, the third leg for EP cars. The only title pending was for stock. Finally, the title was for Roy Bakker, who raced a clean final until the checkered flag. In Modified, with the title decided, Frank Dambrine from Great Britain won last final and he got the 2nd place on the podium.

1/10th IC 200mm started first. Julius Kolff, since the first minute was a firm candidate to the EC title, with a great driving and perfect set up in his car. Only in the first minutes Traugott SCHÄR tried to incommoded Julius with some pressure, but after 3 minutes, Julius set the pace and crossed the line after 45 minutes without mistakes in the first position. Interesting point was that the1st and 2nd places didn’t change their tires in 45 minutes which shows the low tire wear that the track had during the weekend.

1/8th. Last final to decide, who was going to succeed Lars Haugen as a 1/8th European Champion +40. Before the start everybody had in his mind that Arie Manten and Michael Salven were going to be the main candidates for the title. But the other 8 drivers could get their chance to win, because with this challenging track, everything could be possible. At the start, Arie set the pace and got some distance from the others drivers. Salven, with a bad start, had to come back from ninth position. With a great driving and clean fight against Arie Manten, the Serpent driver got the 1st spot in the first ten minutes, and held that until the end of the race with secure driving without mistakes and putting all his experience on the track.

Thanks to everybody for coming. The EFRA 2018 season in IC on Road comes to the end. Now it is time to work on the proposals, calendars and (why not) motivation for 2019 season! 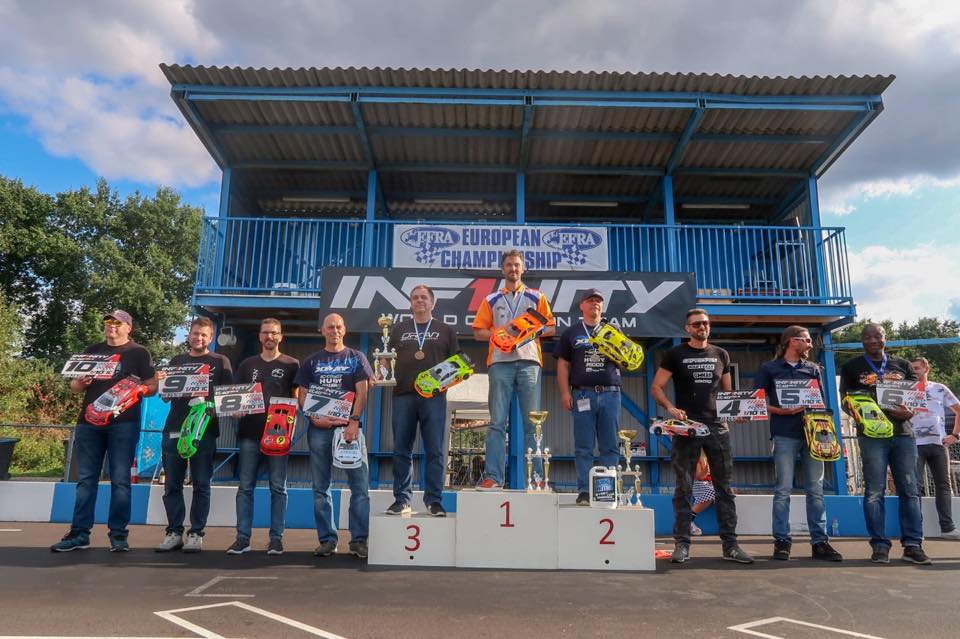 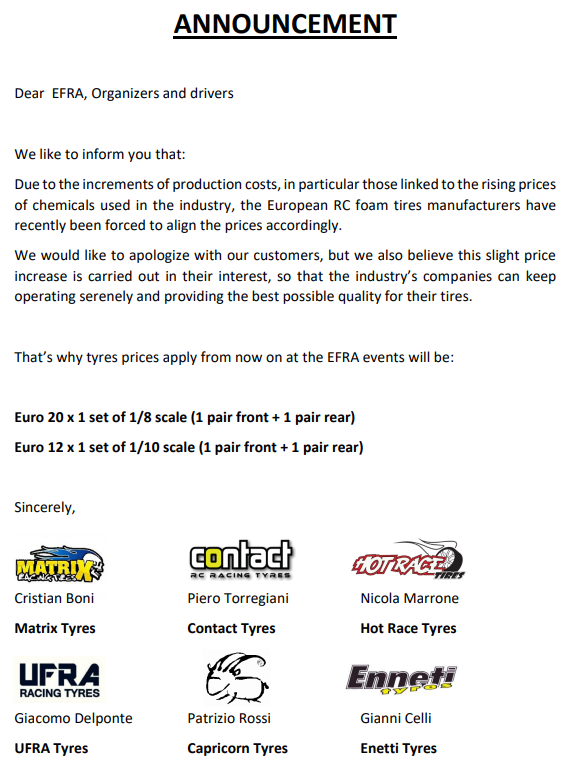 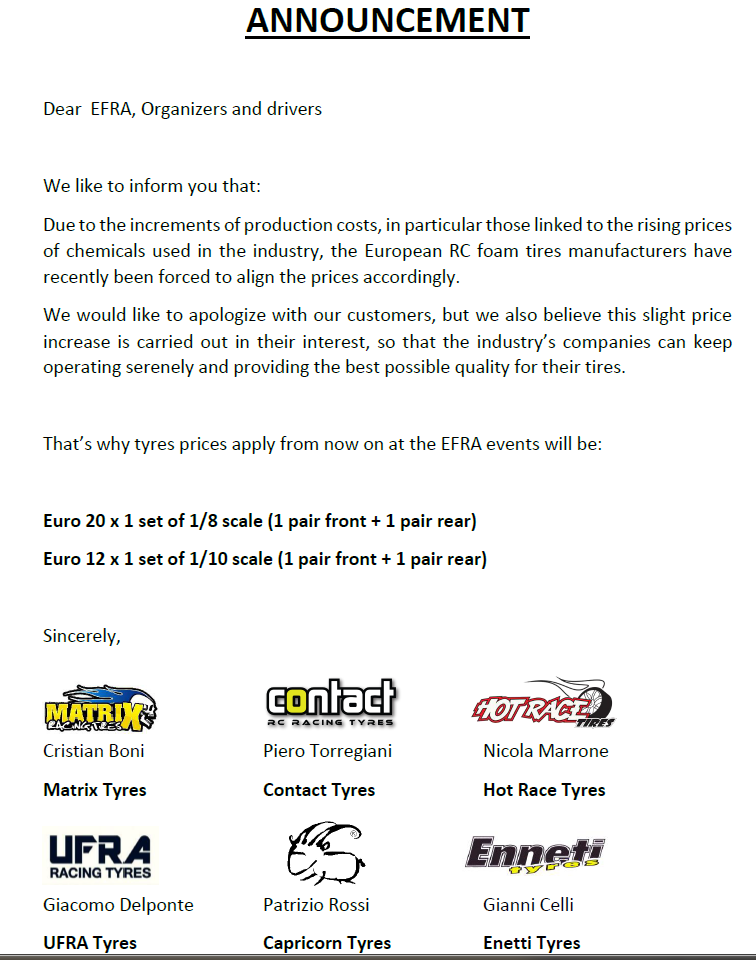 How to register for the EC 40+

Depending on your country federation rules participation is not guaranteed if you are too late for registering as there is a maximum of 150 drivers that can participate.

Camping on site is possible, check the main web page on the Raco2000 website for details and more.

Bjarne Høllund will be the announcer/speaker during the EC40+ race.